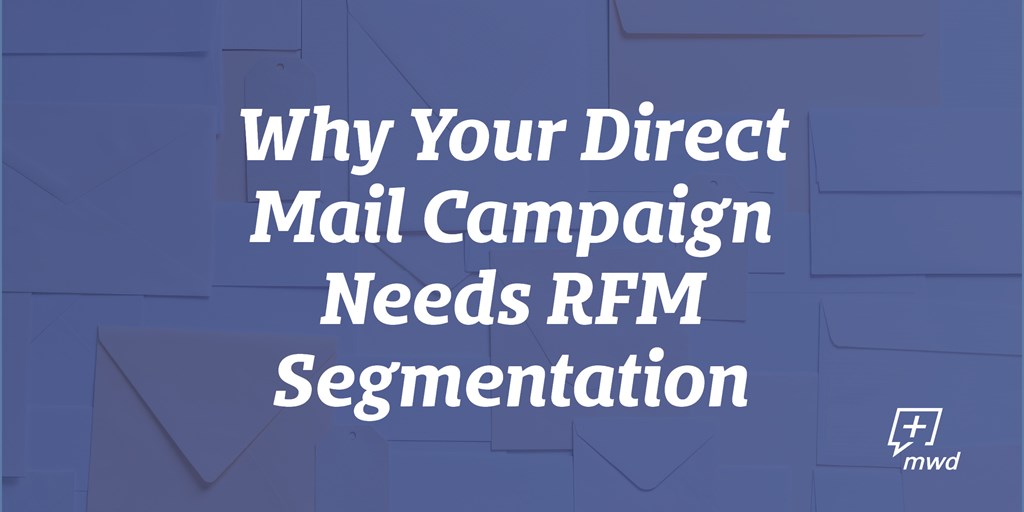 Chances are you have a lot of contacts taking up space in your phone that really don’t need to be there (although you should probably keep the local pizza joint on speed dial, of course… just in case). The same can be said for the data you have collected on your customers and how effectively you are leveraging that data to better drive your direct mail campaigns.

The fourth quarter is upon us – now’s the time to make sure your end-of-year campaigns are successful. It’s also the perfect time to say with confidence that you know who your most valuable customers are. And seriously – who wouldn’t want to say that?

So, how might you do that? It’s an old but familiar marketing tool called “RFM Segmentation”.

What is RFM Segmentation?

RFM stands for Recency, Frequency and Monetary. This analysis is completed using your customer file and their related sales transactions to determine who to target today, and which are the most likely to end up being your most valuable customers in the future. This segmentation requires no special programs and can even be done in Excel. Let’s dig a little deeper:

Recency: How long since your customer has made a transaction. This is the most powerful predictor of who is likely to buy. It’s measured in ranges A-F, spanning from less than a few months to 49 months or longer.

Frequency: Total lifetime transactions (not units!) of a customer. Three to four values are typical.

Monetary: The total value of those transactions. Believe it or not, this is the least powerful predictor and also spans about 6 ranges (also A-F).

Let’s put this all together with a very serious example… Thanksgiving is drawing near and you, the owner of Tasteful Turkeys, a company that designs cute costumes for turkey owners, wants to send out a promotional mailer advertising your latest pilgrim costume. You have a budget for 50,000 postcards and 85,000+ customers in your database. You want to send this mailer to the best 45,000 contacts you have, as well as find 5,000 new prospects.

Mary Gobble is an avid turkey fanatic that was a first-time customer six months ago and spent $1,000-$2,500 on some couture costumes.

Dan Gizzard has been hanging around your contact list for a while. His last purchase was four years ago and has only purchased two times for accessories less than $100.

Which one do you think would produce a better response for your mail campaign?

It sounds simple – and it certainly can be if done correctly. Wading through and evaluating your contacts can seem like a daunting task, but it’s one worth doing so you can rest assured that you aren’t wasting time and money on customers who really aren’t going anywhere.

At Midwest Direct, we have a whole team of data experts that love nothing more than seeing an RFM segmentation-driven direct mail campaign become a success! Contact us now and make those fourth-quarter goals a reality.